When I first started Coolerbs Reviews I never thought I would end up doing a comic. And even when Marvel started to become an obsession of mine, I still never thought it was going to happen.

“The universe was too complex” I’d say, “and I don’t live near a comic book store.”

Yet, for some reason, it never occurred to me that there were original comics being made online. Ones just starting out, devoid of the labyrinthine plot lines and hundreds of characters. Stories I could get into with only a few clicks.

And so, here we are. 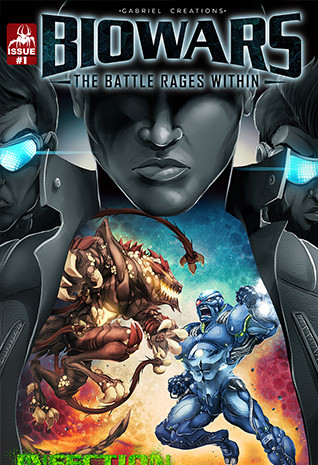 Created by a team of five, Biowars is a free online comic book released every month, which resembles what would happen if Osmosis Jones and Inside Out combined into a superhero story. It deals with the tale of Alex Hawking, the son of the microbiologist Marcus Hawking (gee I wonder where they got that last name from) who stumbles upon some sort of conspiracy involving a new and deadly type of microorganism.

But of course that’s only half of the story. As on the inside of our intrepid hero, a literal war is going on, where the various internal aspects of Alex fight it out for his survival.

And this is where the story makes or breaks for a reader. As the real life aspects are standard comic book fare, it’s the internal battles where all the creativity went. There’s a tangible effort on making sure the various aspects of the story correlate with how the human body actually works. And for someone who’s familiar with the subject, it might be a treat on that premise alone.

But for me, the real draw is the artwork. I know not what the standards for beauty are among comic books, but if it’s higher than this I really need to get into more of them. Because, I mean, come on, look at this:

The detail is astonishing. The lines somehow have a subtle softness to them, and the coloring is glorious. There’s enough small details to keep your eyes entertained for a solid minute. In a time where attention spans can be measured in seconds, that’s impressive.

In fact, the production on a whole is well done. In addition to the amazing artwork, the comic has a good sense of how long to linger on any given scene. There’s never a sense that they are just putting in panels as filler, and the story progress’s with a good pace to it. Never weighed down by lengthy explanations.

Finally, I must touch upon the characters. With this only being the first issue there’s not much of a chance to learn anything about them beyond a few basic facts and traits, but with their proactive nature and lack of brooding they’re already elevated above some characters I could name. (Cough, cough, Spiderman, cough, cough.)

So, with everything covered I guess it’s time to go to the list, this time in a pro and con form!

Did you like the article? Dislike? Tell me about it in the comments. I would love to hear your opinions! If interested in specific articles, or want to write as a guest, you can message me at scifibrandonscott@gmail.com. If you want to help keep this blog going, consider becoming my patron at https://www.patreon.com/coolerbs. Thanks for reading!